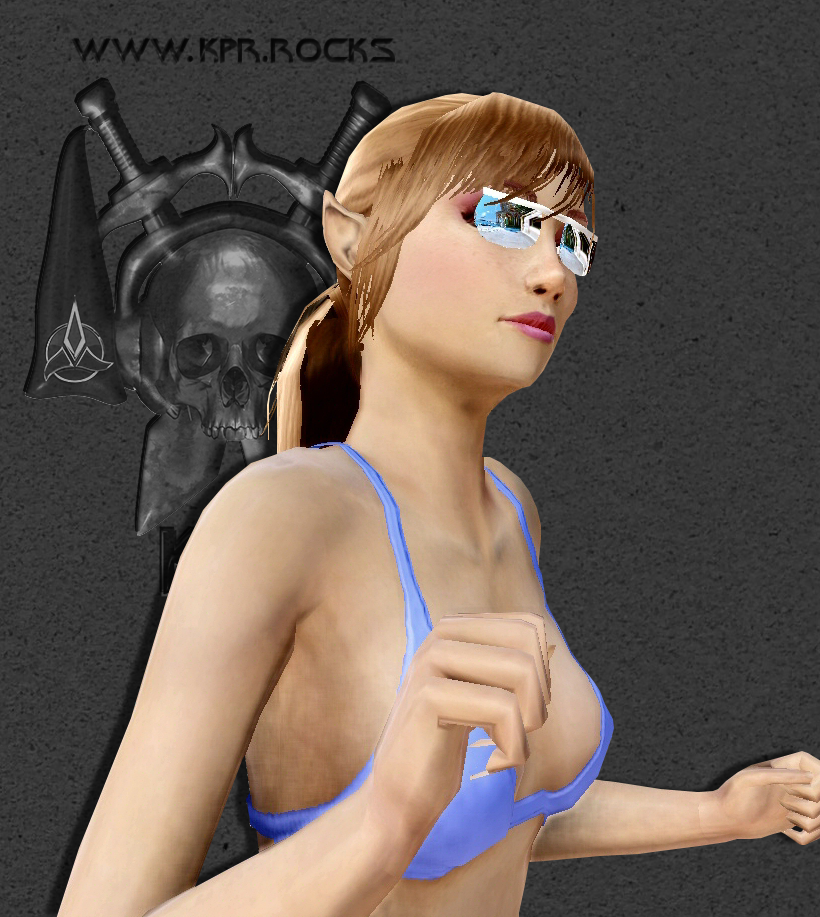 Born Romulan reclaimed from the Borg, outcast, shunned and despised by both sides Twofer truly didn’t fit anywhere anymore. Seen as a heartless monster by the Romulans from whom she had been stolen and as a broken machine by the Borg from whom she escaped. With no ties and no place to call home she signed on with the Federation. Yet, waking and sleeping, she was haunted by a vision. Elusive and hazy it clung to the shadows of her awareness just out of reach, a memory of a face much like her own and the name Kaly. Satisfied it was a vital clue, she was determined to find the owner.  Consulting with the prophets, the Guardian of Forever, and even the Iconians, but the riddles they provide as answers only serve to increase her confusion and frustration. Still undeterred she was not giving up.

I noticed she was becoming more despondent due to the rigorous pace, emotional stress, and disappointment. It forced my hand. As her superior officer and friend, I sentenced her effective immediately to a vacation on Risa for some well deserved R&R. It wasn’t a sentence but from the response it might as well have been. I further insisted she take along our friends, Bob and Sarina, knowing they would be able to give me updates in case she tried to bolt. Reluctantly she complied and I expected her to return “completely refreshed” after a day and insist she get back to work. I was ready to refuse. When no report came back and she didn’t immediately return and I thought perhaps this may really work! Little did I know how well.

After arriving she immediately set out to continue her search. Lurking in the shadows, she attended parties, hoping some new information would surface.  After the first few days she noticed one DJ who was gathering, large crowds. She was spellbound by him, when she at last drew close enough to listen, he seemed oblivious to his own charm, humble, and as she told Sarina “he was a kindred spirit, and his laugh melted her heart when she hadn’t realized she even had one.”. So stealthily she stalked him, but not unnoticed. He would pick her out of the crowd including her in shout outs. Bob says she immediately tried to retreat back to the shadows. Unsoulful however continued trying to reach out to her. Once he called to her to come to the party, to which she replied “I’m sorry but I am needed to fight the Elachi.” Without missing a beat, “The Elachi can wait, get your booty down here to the party.” he insisted. She went. When she arrived he whispered “Welcome to the dark side we have cookies.”

The rest as they say is history he offered to help in her search, and she would be at his side for parties. Now as his wife she hosts Temporal Jukebox at Kirtang Pirate Radio. Please join us Mondays from 10pm-12am EST, and Thursdays from 7pm-10pm EST… the party is here!

Her search continues but now with access to a temporal jukebox that magically transports her to the past she may find what she seeks and in time. …the answers will be revealed.